“Hearty and wholesome food served to the people of the greater East Bay Area. Gold Rush Eatery is a mobile food service truck that quenches the hunger of even the most voracious of appetites.” – Straight off their Facebook Page created at the end of May this year. 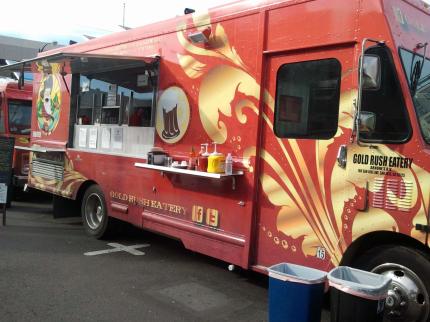 A relatively new food truck, Gold Rush Eatery was founded by Kris Zankich who thought owning a food truck would be more exciting than restaurant.

I’m not entirely sure why it looks like there’s a golden leaf thingy on the side of the tuck but it managed to get my attention.

Gold Rush Eatery is San Jose based so I can’t deny my hometown bias of pride. As for the menu, interestingly enough it wasn’t on the actual food truck but on standing sign next to the truck as shown:

Most likely handwritten everyday, I think I was impressed just by the fact that it was legible and looked like script you would see in a hipster coffee shop menu.

I also love their descriptions on their menu mainly because I love using outrageous adjectives to describe the best food. If you’re going to make it superfluous  might as well go all out!

I should probably chastise myself for not ordering the burger that has the food truck’s name in it but I couldn’t help but order the Pulled Pork. 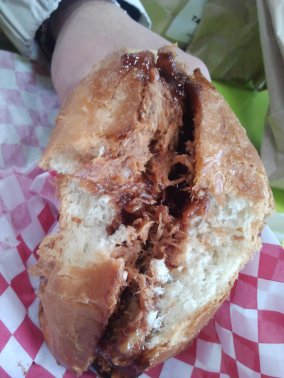 That’s my dad’s hand in case you were wondering by the way. Haha $7.50 for that Pulled Pork.

“Pork Roast, dry rubbed, slow cooked and shredded then paired with our sweet & sassy BBQ sauce. Served on a gourmet egg & potato bun with a side of coleslaw.”

I have to say, the description did the sandwich justice except for the egg & potato bun. I’m pretty sure it was served on a sourdough bun which was nothing special. I feel like that “egg&potato” bun would have hit all the right notes in the symphony playing in my stomach after chomping down on that pulled pork.

Overall, the pulled pork was pretty good! A bit dry once you got through 2/3 of the sandwich but it was cheaper than other pulled pork sandwiches I’ve seen on food trucks. If you’re ever in the San Jose area I would recommend trying their food.

On a random side note…Some friendly advice for them, improve the Facebook Page! It could definitely use a revamp and at least put some pictures to make it appealing for people to like the page!